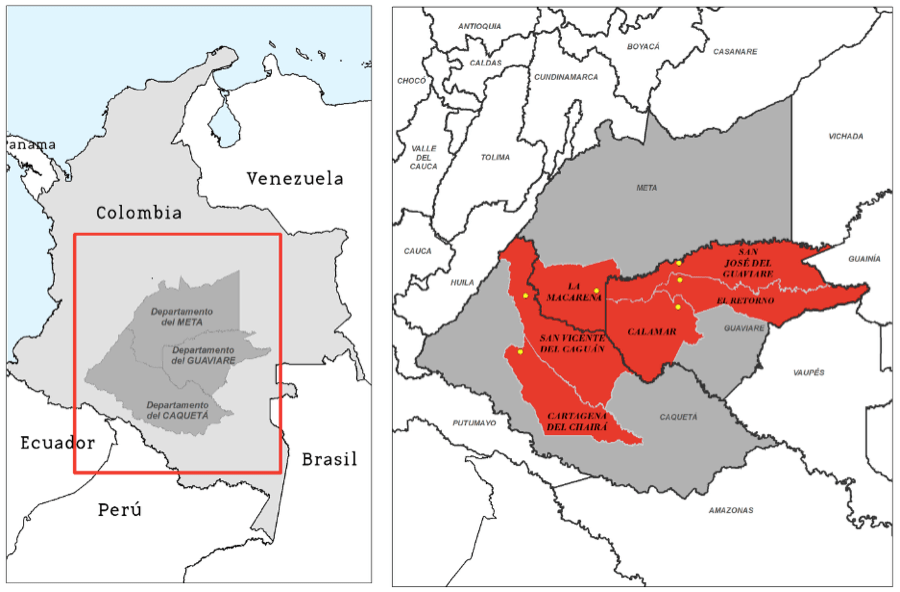 FCDS conducted an exhaustive analysis of intersectoral planning and management instruments – and their use by local stakeholders – in six municipalities in Guaviare, Caquetá, and Meta with the aim of making technical recommendations that could influence the formulation of the National REDD+ Strategy (ENREDD+).

This project ended in December 2015.

The municipalities studied were El Retorno and Calamar (Guaviare), La Macarena (Meta), San Vicente del Caguán and Cartagena del Chairá (Caquetá), totaling an area of more than eight million hectares. This region, together with Putumayo, has the highest levels of deforestation and forest degradation, progressive loss of water potential, harm to biodiversity, loss of soil fertility, and increase in food insecurity in the Colombian Amazon.

By studying the different forms of territorial planning and management, field research based on interviews, focus groups, interviews, and intersectoral spatial analysis, FCDS diagnosed the factors that contribute to deforestation and forest degradation and has provided recommendations for overcoming them. The Foundation analyzed several of the major territorial pressures such as the unplanned expansion of the road network and natural resource extraction initiatives (such as hydrocarbons and agribusiness). It also studied the ways in which campesino communities, and also how the public authorities, interact with the different planning instruments, and the several different ways in which the FARC has acted as an environmental authority.

In the context of the peace talks, FCDS found various territorial reconfiguration processes ongoing in the region. These are fueled in some cases by violence, and in others, by phenomena such as the purchase of massive tracts of land and the expansion of cattle ranching.

FCDS has identified strategies that should be prioritized, including the importance of coordination between municipal authorities for holding back the agricultural frontier in the region, as well as the strengthening of the environmental authorities.

This project was supported by GIZ.