Llanos del Yarí Yaguara II Project: the rebuilding of a dignified, sustainable, and peaceful way of life by the community in their homeland 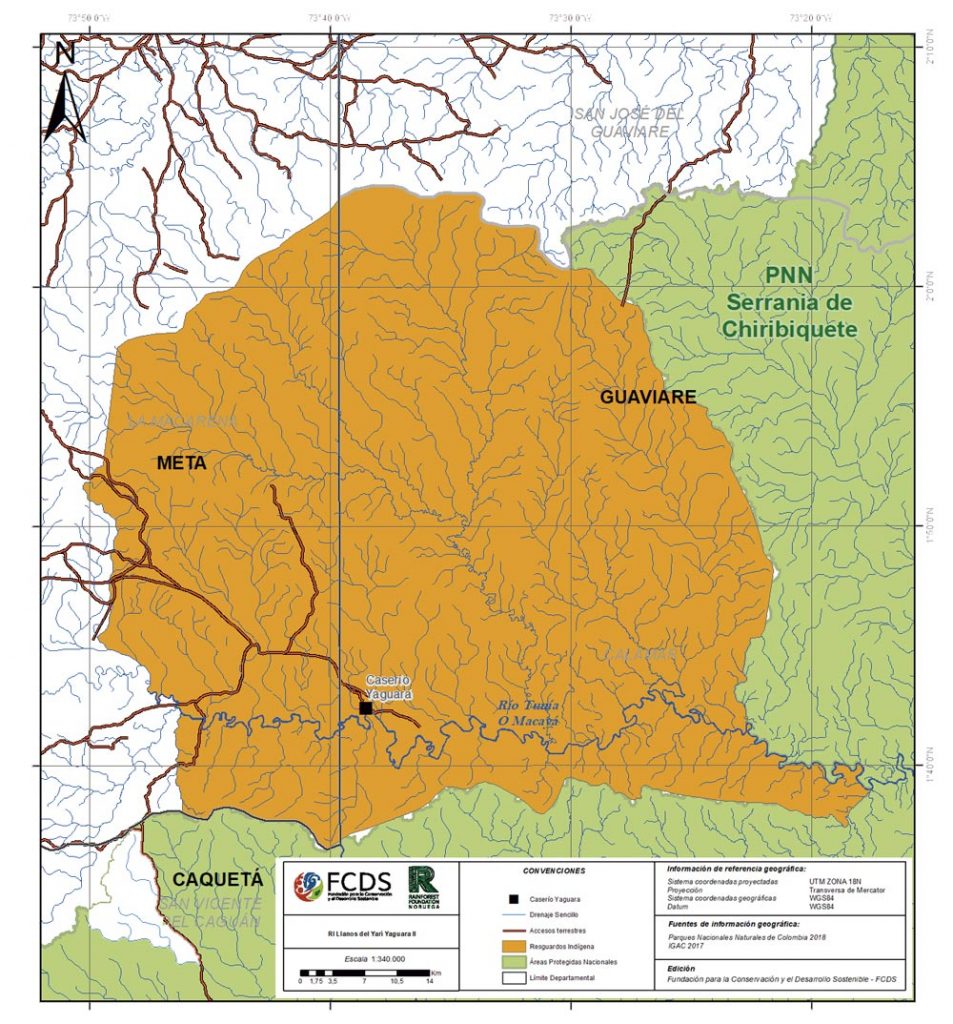 The Llanos del Yarí Yaguara II indigenous reservation covers a vast area of approximately 127,000 ha of forest and 19,500 ha of savanna, at the meeting point of the departments of Meta, Caquetá, and Guaviare. This interethnic community, made up of the Pijao, Tucano, and Piratapuyo ethnic groups, has suffered serious disruptions to its territories, government, and economic structure, after an incursion of armed actors at the turn of the millennium violated their rights and forcibly displaced the population.

Today, the community is contemplating and working towards rebuilding their lives on the reservation, and are moving forward on plans to recover the historical and newfound values that tie them to their territory and confer their right to govern it, all of which were impacted by the violence that expelled them from the reservation.

To achieve this, the project is prioritizing inclusive participation and planning that will encourage the community to work together and create strategies and activities for the appropriation, defense, and sustainable use of the territory. The project will strengthen the community’s capacity for self-government and support their participation in the design of their life plan, create an environmental management plan, consolidate the food security of returning families, and implement a community forestry initiative to provide the reservation with a source of sustainable income.

Strengthen the capacity for governance and self-development of the interethnic community of the Llanos del Yarí – Yaguara II indigenous reservation, in the municipalities of SAN VICENTE DEL CAGUÁN, LA MACARENA, AND CALAMAR.

As part of their economic ventures, the community has been producing honey from native bee species, and this has helped them to appreciate the beneficial connections between trees, bees, and honey production. They have also been harvesting other products from the natural forest, such as ‘mil pes’ or seje oil, traditionally extracted from the seje palm. These examples show that they already have some experience in community forestry.

Due to the reservation’s proximity to the Serranía de Chiribiquete National Park, this project is a community-led initiative to contribute to the Park’s protection and preserve an ecological corridor between the La Macarena and Chiribiquete mountain ranges.

The community has expressed a commitment to rebuilding a collective life for themselves on the reservation, which will capitalize on the reservation’s specific location amidst both savanna and forest by focusing on economic alternatives such as forestry, instead of perpetuating the cattle-raising model as the basis of their livelihood. The fact that La Macarena, San Vicente del Caguán, and San José del Guaviare are among the areas of the country worst-hit by deforestation in recent years warrants the decision to launch this project and justifies FCDS’s commitment to this community.

FCDS accepted the community’s request for support in implementing their project, which was approved as part of the second call for funding of the ‘Pilar Indígena de Visión Amazonia’. It is clear that 2021 will be a key year to lay the foundations for the return of the reservation’s former residents to their homeland. The return of the population represents a serious challenge for the public institutions responsible for restoring the community their rights, in particular, their right to their own territory.